Seeing the Pasture for the Trees 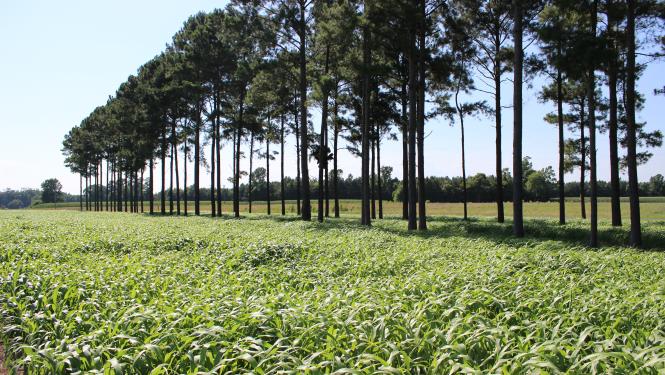 Shaded pastures are among the more challenging conditions faced by anyone trying to establish a productive pasture. This scenario varies but often involves a grazier who wants to set up a very intentional form of silvopasture, managing both trees and forage to balance the productivity of both.

To be clear, there is no forage crop you can grow well under full leaf canopy. Plants need some sunlight to perform photosynthesis, manufacture sugars and grow.  Although the ideal balance of needed conditions differs for each plant, there are also a set of basic requirements for any plant to thrive.

Depending on the available sunlight, a shady area can result in a thinner stand. The less robust growth will also be less resilient to outside impacts like traffic or overgrazing. Too much shading stunts the height of the forage species that have a naturally upright growth habit and also leads to less tiller production. However, in shade-tolerant species, leaf area and both shoot-to-root and leaf-to-stem ratios may be increased.  With less active cell division and growth, sugars are also apt to concentrate in the plant.

Some cool-season species are more tolerant, especially orchardgrass, ryegrass, tall fescue, and meadow fescue. Clovers are another good choice since many species of clover are lower-growing and used to inhabiting the understory of a stand.

Orchardgrass is best (think about the name – it’s right at home under tree cover). Tall fescue can do well, but it has lower forage value, especially in the summer, and can be very competitive with other species. As a sidenote, clovers (especially crimson clover and red clover) and annual ryegrass are considered some of the best species for interseeding into corn at 5th leaf stage, since they can take the shade of the corn crop until harvest, then flourish as winter annuals.

A mix dominated by these species is the best bet since you can’t be sure which components will struggle at various points throughout the year.

The Role of the Trees

As trees go, bigger trees are more suited to silvopastures – they provide more shade for animals and offer thicker bark and more developed root systems to defend the tree against animal impact.

When you plant cool-season perennials (or even cool-season annuals like small grains or brassicas) in a shade-prone area, you’re working in tandem with the trees’ natural growth cycles. If you’re working with deciduous trees, forage germination, emergence, and rapid growth periods likely coincide with the trees’ off-season, when limbs are partially or completely leafless. Especially for species getting their start in the early spring, the open tree canopy helps them capitalize on this opportunity.

Perennial pasture species also minimize competition with the trees. They have different rooting depths, and their active growing seasons are often staggered with those of the trees.

Surprisingly, trees, in turn, work to the advantage of the forage. They create a cooler microclimate, with modulated air and soil temperatures, that allows us to bring cool-season species further south successfully, buffering them from some of the effects of heat and drought.

Lower temperatures also help increase the digestibility of forage – summer heat causes in a dip in forage quality for many cool-season grasses.

Trees also deposit and mine valuable nutrients and organic matter – from dropping leaves to sending roots deep down into the soil. The most productive tree roots (and most soil nutrients) are in the top four inches of soil, however, so animals have to be rotated to avoid too much compaction impact.

A silvopasture can work not only to promote ecosystem health and biodiversity, but also to animals’ advantage – shade protects them from heat stress and improves gain and milk production, and provides nutritional perks that they wouldn’t find in open pastures, like acorns, walnuts, and hickory nuts.

The heat stress threat of treeless areas should be taken seriously and can reduce milk production by 20-30 percent, in addition to slashing pregnancy rates. Heat stressed animals drink more water, which also promotes overgrazing near the water source, under grazing far from it, and spending more time in and around streams.

Trees naturally cool the surrounding air with the release of moisture that evaporates from their leaves – another benefit to cattle.

Ideally, a silvopasture is limited to 200-300 trees per acre, with an ideal canopy cover of 20 percent. Trees are best placed evenly or strategically, whether in grids, single rows, multiple rows, or clusters. When evenly spaced, the shade isn’t limited to one spot, so the animals won’t wear out or overgraze the limited shady spots. A pasture with even or consistent shade distribution will have the most even grazing, with no heavy use areas or areas of heavy manure deposition or flies. Trees should be thinned to favor the best trees. Additionally, planting trees to the west side of pastures is a strategic way to give protection from the afternoon sun.

Pigs are originally forest dwellers and feel right at home in the mixed-species setting of the silvopasture. They like tearing up woody debris and gleaning the leaves. With their rooting behavior, pigs can disturb the soil to help you renovate a wooded area. They can also take care of many invasive species you might not otherwise know how to handle. Invasive species are usually defined as non-native species that “infect” a hospitable area and quickly multiply and take over because of their lack of natural predators. They are quite difficult to eradicate because without thorough removal (you might need full tillage or herbicides) they can keep coming back and spreading, choking out other species and destroying the local ecosystem. When people ask about how to handle invasive species in their pastures, they often mean any species that’s spreading out of control for a variety of reasons, chief among them that the animals won’t or can’t eat it.

If you choose to broadcast your shade-tolerant forage, you might want to let the pigs out first to rough up the area and expose some soil, and then let them out on it after seeding to do their version of cultipacking – “hoofing” the seed in.

Pigs, goats, and even sheep can be left in an area to overgraze swaths of invasive species you want to get rid of. For example, Japanese stiltgrass is a very fast-growing, lush, and opportunistic species that cattle won’t touch but pigs will root up and completely demolish.

You will have to monitor the area closely for animal impact, and avoid leaving the animals on so long that they destroy the intended species – including the trees! Building a successful silvopasture really means maintaining a multi-story ecosystem in such a way that no species is managed to the detriment of the others.