What’s the best time of day to make hay? 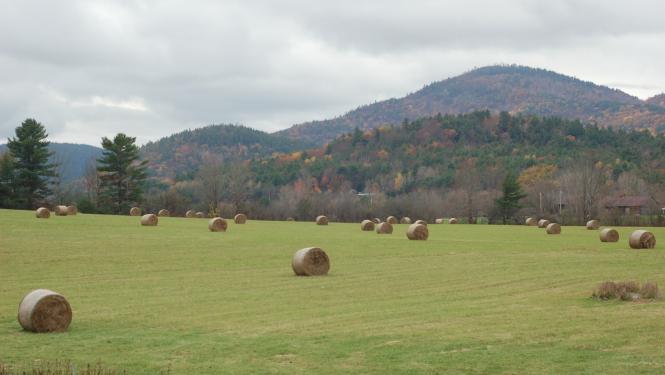 The best time of day to cut hay is a balancing act between maximizing the nutritional quality and store-ability of the bales. During the day, the plant undergoes the process of photosynthesis, or production of carbohydrates- what we know better as ‘sugars’. However, these sugars are produced at a rate faster than the rate at which they are used, leaving an excess of carbohydrates that are stored in the leaves. This accumulation of sugars is then tapped into during the night and used as an energy source for growth and maintenance through the process of respiration, until photosynthesis begins the next morning. So, if we were to cut hay with the single goal of maximizing nutritional content, it would be best to cut right after sun-down when the sugar accumulation is at its maximum.

However, this is not the only consideration in making hay. Rather, drying the hay properly is arguably the most crucial part of the process. Respiration continues even after the hay is cut, continuing to deplete the sugar content in the leaves until the hay reaches a moisture level of less than 20%. In fact, continued respiration can account for 2-16% in dry matter losses. Of course, it is also critical to get the hay dry before the next rain. Did you know that 2-8% of dry matter is lost per inch of rainfall? It can also be expected that dry matter losses from cutting, tedding, raking, and baling can account for at least 15% of dry matter losses, and continuing the handling process after a rain event can increase the DM loss exponentially.

At moistures greater than 20%, respiration continues, the temperature of the haystack increases, fire is a possibility, and the Maillard Reaction (the caramelization of carbohydrates and proteins) occurs. With all of these factors in mind, it is best to cut hay when there is the greatest opportunity for successful drying, or early in the morning after the dew has dried off. As the old saying goes, “make hay while the sun shines!”

The reality of the amount of work to be done and the time constraints around it in the end dictates the cutting schedule, and this means taking advantage of any fair-weather window in which the entire process can be completed through baling. This can mean starting in late afternoon – although respiration continues overnight, photosynthesis can begin again the following morning (note that photosynthesis only continues down to about 60 percent plant moisture level). Work with what works with your schedule to get the hay baled before a rain. We strongly advocate wide-swathing hay, which speeds drying time and also exposes more of the cut material to sunlight, letting it continue photosynthesis.