How much nitrogen do we REALLY need for fescue?

Feeding beef cattle with stored feedstuffs can be expensive. Making good investments in how best to get through the lull in forage growth during the cold and wet winters can be complicated by the vagaries of weather, as typical winters give way to greater frequency of unusual winters…Uncertainties are nothing new in agriculture, but we always strive to understand as much about the possibilities so that we can try to beat the odds. A community of on-farm research on a specific topic can help accelerate the collection of information in a relatively short period of time to help us make informed decisions. This was the approach of a research project to investigate the optimum nitrogen needs of fall stockpiled tall fescue.

Tall fescue is one of the most common perennial, cool-season forages throughout the southeastern US. Its vigorous growth in the spring and fall and its seemingly endless capability of re-emerging after summer dry periods continues to amaze. A big part of that reliability is attributed to the endophytic fungus that lives in the base of the plant. The vast majority of fall fescue in the region still contains the wild variety of the fungus, which is well known to produce toxic ergot alkaloids that restrict blood flow in grazing livestock, causing a sequence of animal health disorders, some not so serious and others very serious. However, there are novel-endophytes (a.k.a. friendly fungi) that have been selected and cultivated in some fescue varieties so that toxic ergot alkaloids are not produced by the fungus. Available evidence shows that novel-endophyte varieties of tall fescue can significantly improve animal performance. As well, forage stands are persistent, unlike those of endophyte-free tall fescue.

Getting the most out of tall fescue pastures requires investment at various stages. Planting a stand on ground previously cultivated for crops may not need much for soil acidity adjustment or even phosphorus and potassium inputs due to carryover from high-fertility-requiring crops. However, the need for nitrogen would likely be high due to crop uptake and rapid loss of nitrogen following cropping. Therefore, a recommendation for nitrogen is often standardized to meet the production capacity of the new forage crop. Recommendations for other nutrients would be based on soil-test levels. Starting a new pasture on land cleared from woods might have low levels of phosphorus and may be quite acidic, so soil testing to know how much fertilizer and lime to apply will be essential. Depending on soil type and how the land was prepared, soil organic matter level may be much greater than if the field were in cropland. About 5 percent of soil organic matter is composed of nitrogen. However, nitrogen fertilizer recommendations would still typically be based on how much forage is expected to be produced.

If 4 tons per acre of hay is expected to be produced (i.e. ~7000 lb of forage dry matter with 15 percent moisture), then 140 lb of nitrogen per acre would be needed based on 12.5 percent crude protein content.  If half the forage is expected, then half the nitrogen would be needed.  Typical nitrogen fertilizer recommendations don’t change much, whether you were starting a new pasture or had a legacy pasture since grandfather’s days.  The only consideration is whether the pasture is grazed or hayed.  The nitrogen rate could be reduced by about half if grazed than if cut for hay.  This makes sense that a hay crop would have the nitrogen removed and the hay fed elsewhere on the farm or sold on the market, and so nitrogen would be removed from the field.  But where does the nitrogen in a grazed pasture go?  This was a driving question for a project that explored yield response to fall nitrogen application prior to stockpiling for the winter. 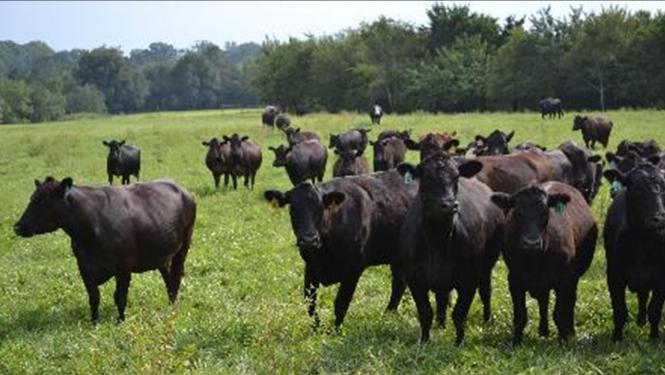 When nitrogen fertilizer is applied to pastures, we expect it to be taken up by growing plants and lead to significantly greater quantity and quality of forage produced. We can liken it to a glass of water. If a 2-cup glass is empty and we are thirsty, then filling that glass with 2 cups of water will allow us to drink all of that water as we desire, either in a few minutes or over the course of several hours. It’s available for us as we desire. Inorganic nitrogen is similar in that it is theoretically available for plants to take up once it is in the root zone. If, however, we take this glass with us in a truck, we might lose some of that water during the bumpy ride. This would be like having extreme weather events that could either leach the nitrogen from the soil, cause volatile loss when urea is applied during dry weather, or flow off the field with excessive rainfall. Once we drink that water, we’re ready to work some more – just like a forage crop that is well nourished has the capacity to produce in abundance. Losses of nitrogen in a pasture do occur (leaching, volatilization, harvest, ingestion by animals, etc.), and so there is a need for additional nitrogen to overcome deficits. But how much does that pasture really need? Let’s assume that we don’t drink but half of the originally full glass of water and there is still some left even after spilling a bit during the bumpy ride. If we get a recommendation to “fill it up” and we fill that 2-cup glass of water with 2 cups of water (because that’s what the dispenser is standardized to do), then we end up wasting whatever water didn’t fit in that glass. We should have had some way of telling the dispenser that our glass already had ¾ cup of water in it. Therefore, just like the finite volume of a glass of water, we can liken the supply of nitrogen in soil. We need a way to measure how much nitrogen is in the soil already, so that we don’t underfill or overfill our glass of water. If you wanted to replace this story of water with your other favorite drink, please do so 😊… 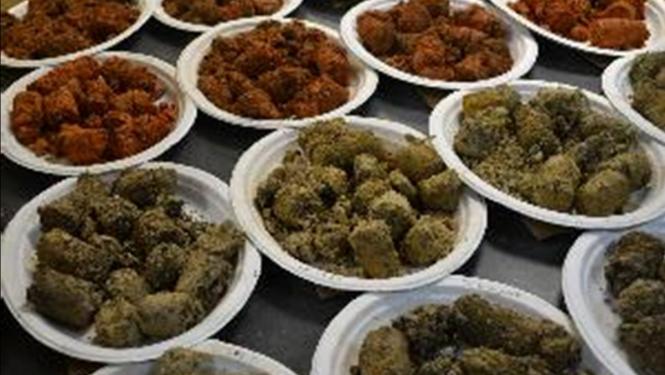 How do we measure nitrogen in soil?

We challenged the notion that grass is grass and all grass pastures are one and the same. Therefore, we needed to conduct tests on many different pastures within our region. In the summer of 2015, we looked for tall fescue fields on the rich diversity of research stations managed by North Carolina Department of Agriculture and Consumer Services. Fourteen fields were tested on research stations and 8 fields were tested on private farms. Each test was set up the same way, with 16 small plots laid out on a ¼ of an acre of a uniform part of a field. Soil was sampled to a 4” depth in late August to early September and analyzed by routine soil testing, but also for a variety of organic carbon and nitrogen characteristics. In the first week of September, nitrogen fertilizer was spread onto the 16 small plots within each field with four different rates of nitrogen – 0, 40, 80, and 120 lb nitrogen per acre. This meant the four rates were repeated four times and treatment placement was randomized. Fields were fenced off from grazing livestock to allow forage to grow for about 16 weeks until harvest at the end of December to middle of January. This was the time that pastures would be expected to be grazed by cattle for the remainder of the winter. 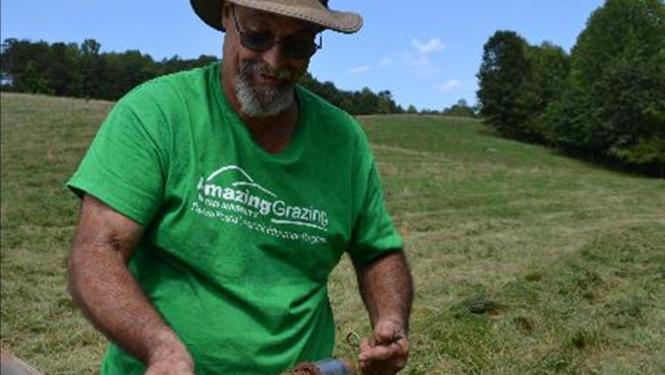 If inorganic nitrogen availability were limited in soil, then applying nitrogen would yield significantly more forage than when not applying fertilizer. This was the default assumption. If soil nitrogen mineralization were substantial, then yield response to additional fertilizer would have been small or even nil. Responses could have been at the extremes or somewhere in the middle. An additional hypothesis was that we could use a simple biologically based test to predict how much nitrogen was mineralized in each field.

What did we find? 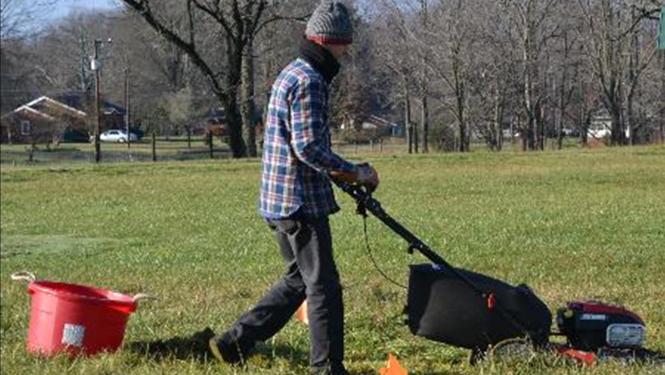 We were encouraged by these results and searched for more farm collaborators in 2016. Tests were made on 35 fields using the same approach as the previous year and more than two dozen of them were on private farms. Unusually dry conditions persisted until December at some locations, but more than half of the locations had reasonable precipitation. Results were generally consistent in the second year with those in the first year. Across the two years, only 9 percent of the fields had economically significant yield response to warrant more than 40 lb nitrogen per acre. Another 16 percent of fields had yield response that was significant but with nitrogen input less than 40 lb per acre. That meant that 75 percent of the fields tested did not need additional nitrogen fertilizer other than what was already in soil. This nitrogen in soil was being mineralized from soil organic matter, and the simple and rapid test (known as soil-test biological activity) was able to effectively differentiate which fields needed nitrogen and which fields didn’t need nitrogen. The associations weren’t perfect, but field research is never perfect. The first two years of testing had field sites from the Coastal Plain of North Carolina to the Appalachians of West Virginia and throughout the Piedmont regions of Georgia, South Carolina, North Carolina, and Virginia. Some variability in results could be expected with testing in a large geographic area. 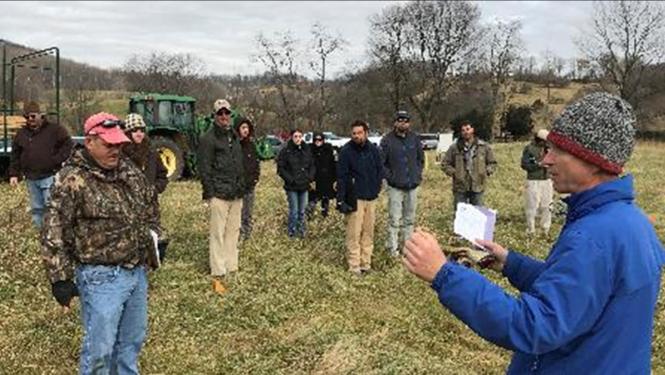 Being stubborn and thinking to focus more on the Piedmont of North Carolina, I felt compelled to conduct more tests to prove that what we had been observing was real. So, we conducted another 36 tests on fields in 2018, which turned out to be a season with very good weather conditions. We tried to get more fields that were recently established in pasture and that might be on some poorer ground to strengthen our dataset on the lower end of fertility after having published the results from the first two years with 75 percent of the fields not responding economically to nitrogen fertilization. What we found in the third year of testing confirmed results from previous years.

ith these field and lab data, we have confidence in making a recommendation for nitrogen fertilization of stockpiled tall fescue that varies from 0 to 80 lb nitrogen per acre, depending on the level of soil-test biological activity (STBA). A fact sheet describing this recommendation can be found at the website of the Soil Ecology and Management lab on the “briefs” tab under the title of OFR-2020-02. Farmers interested in sampling for STBA have some options, but none of them ideal at present. No commercial labs are measuring STBA in the same way that we do at our research facility in Raleigh NC. STBA and variants of the method are generally categorized as “short-term carbon mineralization assays”. There are several commercial labs that do measure short-term carbon mineralization, and most of these laboratories use the Haney Soil Health Test or Solvita Soil CO2 Burst Test. Both of these tests incubate soil for 1 day, while STBA is incubated for 3 days. Other differences occur among laboratories too, and no wide calibration among methods has been developed. The Cornell Comprehensive Assessment of Soil Health also measures short-term carbon mineralization using a 4-day incubation and other variations of the protocol. Interpretations of alternative soil testing to predict nitrogen fertilizer recommendations must be developed and verified.

Soil is alive and teeming with microorganisms that decompose plant and animal remains. In this process, they release nitrogen to soil that can then be absorbed by plant roots. A simple soil test could help growers determine the optimum level of nitrogen fertilizer to apply. Because, in the end, it matters whether that glass has something in it before we add another cup of your favorite drink!

Check out our fescue varieties